Special Advisor to the President on American Indian Affairs

The position of the Special Advisor to the President on American Indian Affairs was created by ASU President Michael Crow to oversee University initiatives and programs that relate to American Indian issues and programs. The Special Advisor effectively fosters and develops relationships with Tribal nations and their members on behalf of the University. The Special Advisor is responsible for advising ASU on programming and initiatives that are designed to help improve outreach, retention and graduation rates of American Indian students. The position began with former special advisor Peterson Zah (Navajo), who served as President of the Navajo Nation and was sought out for his expertise in tribal relations by President Crow. Following Peterson Zah was Diane Humetewa (Hopi), who served as U.S. Attorney for Arizona before being appointed as Special Advisor.  Dr. Bryan Brayboy (Lumbee), who has taught at ASU since 2008, was appointed in October 2014 and also serves as President's Professor in the School of Transformation in the College of Liberal Arts and Sciences and as the Director of the Center for Indian Education. With his extensive experience working in higher education, Dr. Brayboy was appointed by ASU President Michael Crow to serve as Special Advisor in 2014. In his role, Dr. Brayboy serves as a “thought leader,” advising ASU on internal capacity building and strengthening. This includes engaging in programming and initiatives that are designed to help improve outreach, retention and graduation rates. It also includes fundraising activities and recruiting and retaining Indigenous faculty. He serves on several committees and is charged with running the Office of American Indian Initiatives.

Dr. Brayboy is ASU President's Professor of Indigenous Education and Justice in the School of Social Transformation. At ASU, he is director of the Center for Indian Education and co-editor of the Journal of American Indian Education. He also has affiliations with the Mary Lou Fulton Teachers College, American Indian Studies, and the Department of English. From 2007-2012, Brayboy was Visiting President’s Professor of Indigenous Education at the University of Alaska Fairbanks. His research focuses on the experiences of Indigenous students, staff, and faculty in institutions of higher education, Indigenous Knowledge Systems, and Indigenous Research Methodologies. He has edited and authored over 70 scholarly products, including five book-length monographs. 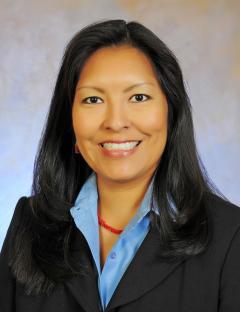 Diane Humetewa is an enrolled member of the Hopi Tribe and is an alumnus of Arizona State University earning her Bachelor of Arts and Juris Doctorate degrees in 1987 and in 1993. She served as the U.S. Attorney for the District of Arizona (2006–2009), the first American Indian woman to serve in such a capacity. Humetewa was appointed as Special Advisor to the President on American Indian Affairs in March 2011, where she served on various advisory committees and continued to teach law at the Sandra Day O'Connor College of Law. On September 19, 2013, U.S. President Barack Obama nominated Humetewa to the United States District Court for the District of Arizona and was confirmed by the U.S. Senate on May 14, 2014. Humetewa earned another distinguished honor of being the first American Indian woman to serve as a U.S. federal judge. 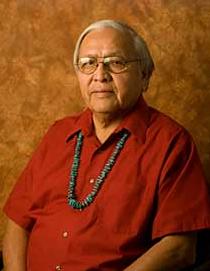 Peterson Zah served as Chairman (1982–1987) and President (1990–1994) of the Navajo Nation and is an alumnus of Arizona State University earning his Bachelor's degree in education. He has also been awarded honorary doctorate degrees from ASU, Colorado College, and College of Sante Fe. Zah championed Navajo education by implementing new educational policies as well as renogotiating mineral, coal, oil and gas leases with major energy companies and working on efforts to help resolve the Hopi-Navajo land dispute. Zah served as the Special Advisor from 1995 to 2011, and during his tenure significantly grew American Indian student population.  Zah helped establish the inaugural Special Advisor position, fostered Tribal relations across Arizona for ASU and developed many of the American Indian initiatives now at the university.